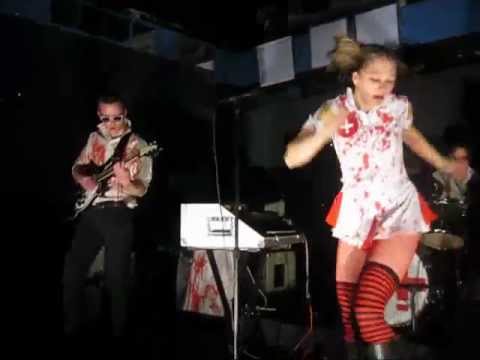 What the Bloodtypes are doing both live and in the studio should, by all laws of nature, go terribly wrong. And yet – it works! Infusing their love of 77’s

What the Bloodtypes are doing both live and in the studio should, by all laws of nature, go terribly wrong. And yet – it works! Infusing their love of 77’s punk with bits of garage, elements of new-wave, even some prog, dueling boy-girl vocals, a good dose of fog, stylish bloodied up shirts, jumping high-fives, and ridiculous stage antics, this razor-sharp four-piece is bound to slash a smile on your face – whether you want it or not.The Bloodtypes burst from the heart of the dripping Pacific Nortwest back in the distant year of 2010 when German expat babe Schneck Tourniquet teamed up with three Portland punkrock veterans. Their mission: keep new-wave fun alive in a scene that had become tiresome bearded urban folk (or whatever). What better antidote than a high-concept dress up band, delivering songs about nuclear catastrophes, dangerously sexy nurses, exploding suns and …cats?

After countless local shows and tours up and down the westcoast and having honed their sound to surgical perfection, the Bloodtypes were ready to record their sound for posterity. The 12 tracks on their crowd-sourced debut album “Just Your Type” perfectly document their evolution as a band. From the garage-hit “Affected”, via the hilarious “Katz R Punx” to the epic grandure of “Just Your Type” and “Radiation Sickness”, each tune dares you not to pogo-dance around your room. Don’t even try to resist. There is no point. Having up to this point financed, crowd-sourced and promoted their work in the true DIY ethos, the Bloodtypes came to the attention of the European label P.Trash in late 2012. P.Trash is releasing their debut album on vinyl in Europe in the summer of 2013 – which marks the upcoming European tour as the next logical step for the band.

Not willing to rest on their laurels, the Bloodtypes are currently hard at work in the recording studio with plans to release two 7” in the near future. Always writing, new songs are in the works, some of which will reach your tender ears when you attend one of their undoubtedly kickass shows throughout Europe this September and October.
The Bloodtypes have come here to be the universal donors, saving your and everyone’s lives single-handedly, one new-wave-garage punk song at a time. Don’t miss out on this infusion of awesomeness.